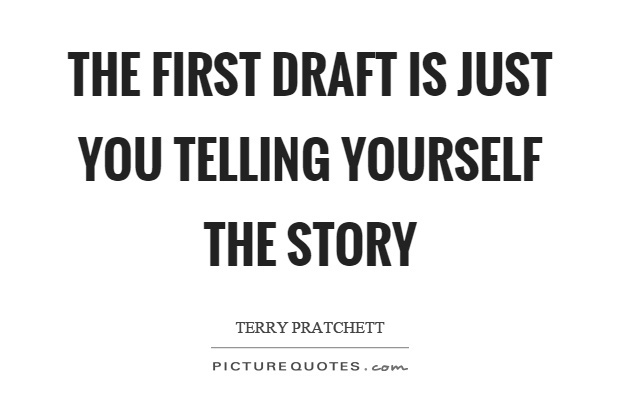 I had to stop working on the second book of the Half-Life of a Soul series for a little bit. (No, I have no titles for the individual books. I will eventually think of something clever, but for now, ha. haha. no.)

The reason wasn’t that I was driving myself to perfection. For once, it wasn’t a health problem. I simply realized the way I was going would result in a story that ran far too slow to keep anyone’s interest. I had to stop, rethink the plan I’d been working on since I sat down with this story, and make some adjustments.

The new version is going to be MUCH more active and interesting now that I’ve shifted it some.

While I worked through this, I realized something, though. In fact, it’s what I’ve been telling a friend who wants to write but keeps getting stuck.

The first draft doesn’t have to be perfect. It can have plot holes big enough to swallow a cruise ship. It can have terrible grammar. Scenes can be unclear.

Yes, going back and fixing things is a lot of work. I know. I’ve done it on everything I’ve ever written and man, sometimes you just have to chuck an entire chapter out and rewrite from scratch. That’s fine too! Even with the first book of the Half-Life of a Soul series, I had to do this. I even broke down and hired a developmental editor because it simply wasn’t working and I couldn’t understand WHY.

My regular editor was crazy helpful too. She saw me getting excited at working over the opening again and jumped in to beat me until I finished the book. She kept me working on the draft, knowing if I went back to start over I’d never finish.

In the end, I basically had to revise the first 5 or 6 chapters, and make intensive edits on the next 5. But, now I have a completed story, in beta, and I’m getting good feedback on it.

I look at the first draft and what’s in front of my beta readers now and man, that first draft was indeed rough. I’m still proud of it. I mean, hey, I finished an entire book that was just an idea I came up with! Whether it gets revised, edited, ripped apart, put back together, and then edited some more… it’s a completed book. I have done a thing!

So, remember writers, no matter where you are in your journey, just get the story out. Put the main points where they go. Find out who your characters are. You’re planning a road trip and there may be detours, but you’re still going to reach the destination if you get in the car and just drive.

My Tweets
Join 980 other subscribers